Today we had a visitor.  Emily from Oregon Folk-Life, the sponsor of our grant, drove from Eugene (5 ½ hours!) to meet Verna and I and discuss our projects progress.  One of the topics that came up was the type of tools we use today with our basketweaving.  Before white contact, our Karuk ancestors did not have metal, but I’m sure if they did, they would have used pocket knives, metal awls, scissors and clippers. Recently Verna acquired a bear grass “sizer” made by a woman in Washington.  We are in the process of refining it, but it seems to work great in getting long straight identically sized bear grass blades. It’s a piece of wood, about 4 inches long, with two small pieces of razor blade inserted parallel to each other at one end of the wood.  The bear grass is then pulled in between the two razor blades sizing them perfectly. Beautiful baskets can be achieved when a weaver’s materials are as close to the same size as possible. Below are pictures of some of our weaving tools, and my cap progress to date.  It was a good day. 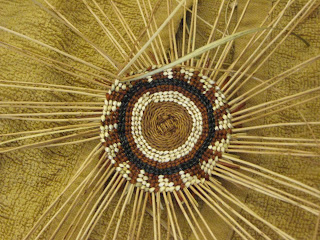 My progress to date. 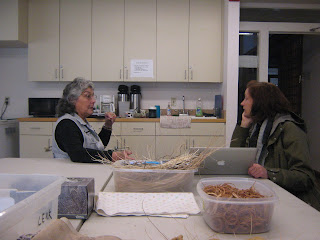 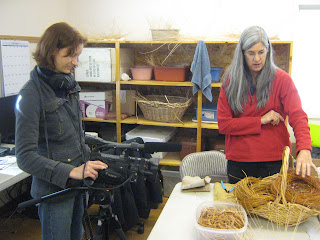 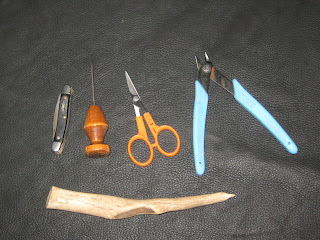 Tools, including my favorite antler awl made by a friend. 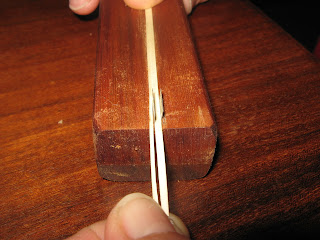 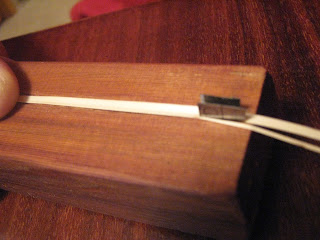 This shows the blades.
Posted by Karen Young-Lenk at 8:36 PM No comments:

The two-hour drive to meet with my basketweaving teacher, Verna, is on a remote two lane windy road.  Most of the way there is no cell phone reception. Today at about an hour and forty minutes in, I had a flat tire.  I have never had to change a flat before.  Fortunately, there was cell reception at that spot (my lucky day!), so I called Verna.  She said she would come help me out.  I proceeded to get the spare tire, jack and instruction book out.  I was all set up when Verna pulled up 20 minutes later.  Just at the same time, two giant bald eagles circled and perched in a tree not too far from us.  We got the tire changed and headed on into class.  I’m including a couple pictures of Verna and my “learning cap” to date.  Thank you Verna for teaching me to make baskets and change flat tires!! 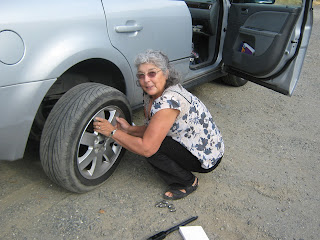 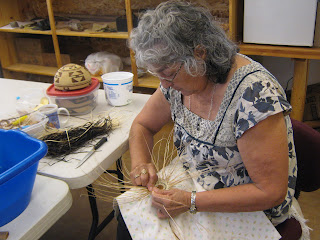 Verna is working on her own new cap. 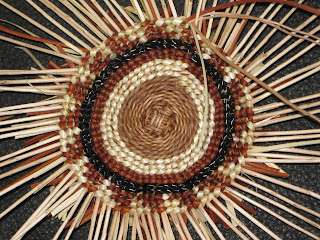 My cap progress to date.
Posted by Karen Young-Lenk at 5:31 PM No comments:

A small section of bark is taken from an alder tree and the outer layer is removed.  When the inner bark is exposed to air, it turns a beautiful rust/red color.  Every tree will yield it’s own individual color.  The inner bark is broken into small chunks and then pounded with a rock.  These crushed pieces are then placed over the bundled woodwardia in a pot of cool water, and left to soak until the desired shade is reached.  The fern is then hung in the sun for a day to dry and set the color.  After drying, the woodwardia is bundled for storage. 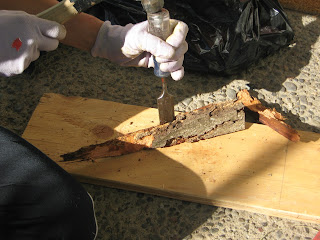 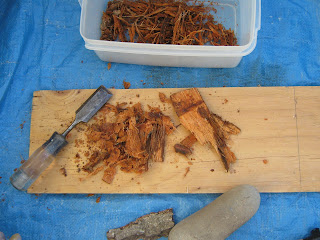 Chunks of inner bark ready for pounding with a stone. 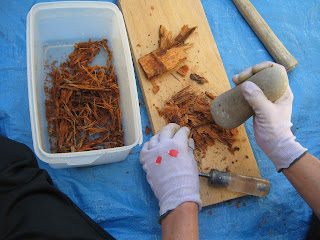 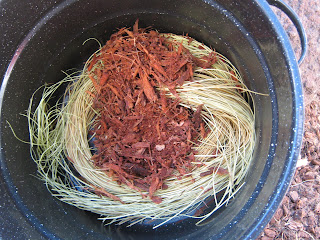 This is the pounded alder bark on top of bundled
woodwardia fern just waiting for water in the pot. 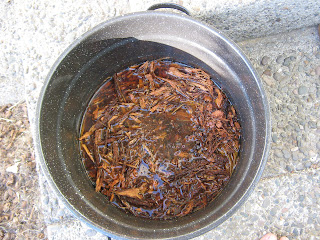 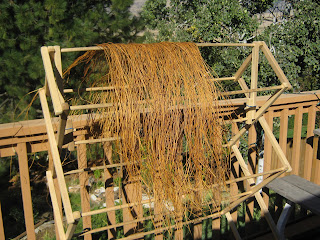 Drying in the sun to set the color.  The color deepens
as it's exposed to the air. 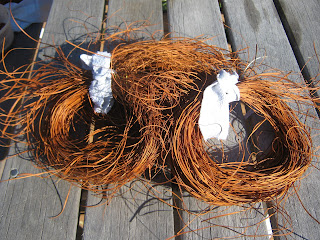 Posted by Karen Young-Lenk at 9:52 AM No comments:

Woodwardia fern dyed with alder bark is used as an overlay material in our basketry designs. It is the largest fern, standing 4-6 feet tall.  As with most ferns, it loves moisture.  It can be gathered any time in the Summer-Fall after it has reached maturity and before it freezes.  Only a few stalks are taken from each plant.  The fronds are removed at the gathering site so the spores can regenerate.  The stalks are then pounded with a rock, or my “modern” method is to crush them with a rolling pin.  Inside are two white cords running the length of the stalk.  The cords are removed and bundled to dry. The next step is dying the cords a beautiful rust-red from the bark of an alder tree.
I had to find a new gathering spot this year because the spot I have gathered the past few years was burned by a forest fire.  Following, I have taken pictures of the burned area and the new growth that is already sprouting from the plants.  I think next year I will be able to gather at this site again. 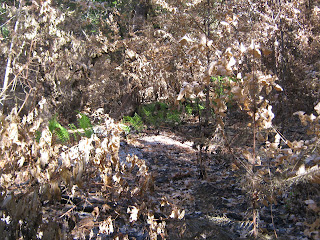 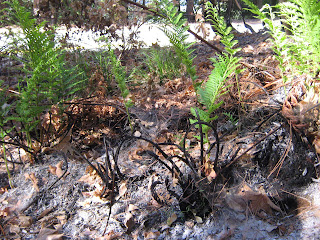 Close up of charred plants with new growth. 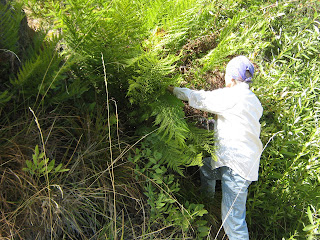 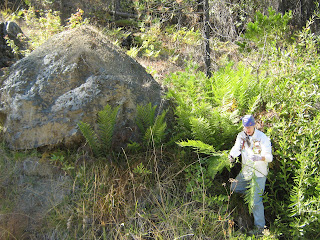 The fronds are removed at the gathering site. 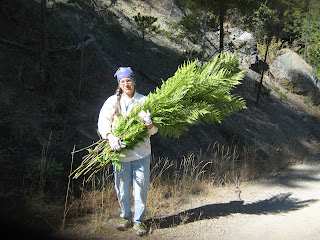 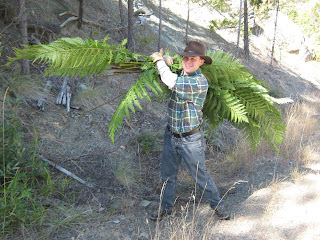 Gathering basket material is often a family affair.
My son and husband (and dogs) helped on this trip. 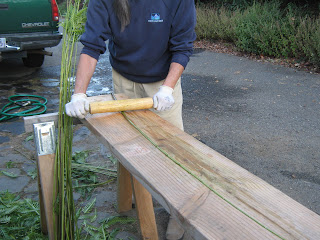 Crushing the stalk with a rolling pin so the cords
can be removed. 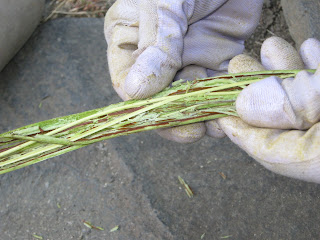 I use the two white cords running the length of the stalk. 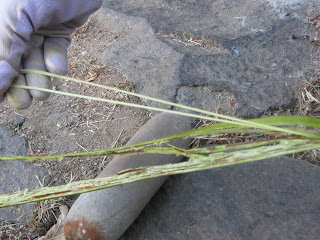 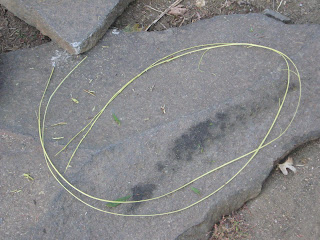 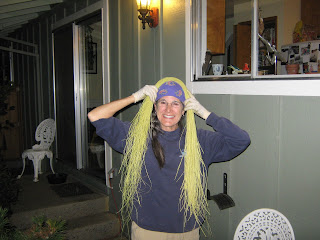 Happy the work is done.
Posted by Karen Young-Lenk at 9:38 AM No comments:

Karen Young-Lenk
I am a Karuk basketweaver, as was my great-great grandmother Emma Pearch, from the Klamath River in far Northern California. I'm dedicated to continuing the basketry art form of my ancestors. The gathering and processing of my materials through to the actual weaving of a basket gives me a deep sense of connection to the rhythms of the natural world and to my heritage. I aspire to make Karuk baskets that show the beauty and creativity possible using the traditional plant materials and the techniques passed down since our beginning of time.